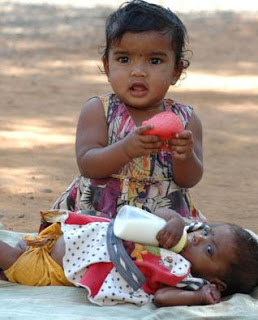 As usual, the title of the post has got to do nothing with the content. The title only speaks about my attempt to revive the blog again and like always, I promise to post regularly now (who am I kidding?)

Anyway, this post is about an article I recently read (as recently as today since it was in today's newspaper). While I do not agree with everything written in the article, it made for a compelling read and more importantly the message forming the crux of the article is something I really hope can be implemented.

The article is about how the policy to curb 'female foeticide' has not yielded the desired result (you will know why I write female foeticide within quotes once you read the article) and where is it that we have gone wrong and China and South Korea have gone right (my next step is going to read about the policies of these two nations). What stands out it that the authors (who are members of the National Advisory Council) have pointed out that the policy is flawed as it has always focussed in the poor while addressing the problem when clearly, the problem is deeply entrenched in the Indian society irrespective of the financial status of the offender.

Without boring you (not that anyone is reading), here is the link to the article: India & the sex selection conundrum
p.s. I would have prefered to post this on another platform that could reach out to a wider audience but well, I have my issues. Not important.

-
The image clicked by Mohd. Arif has been taken from the article I have written about. I believe The Hindu or the photographer will not sue me for copyright violation and in case they are offended, I hope they approach me first so that I can take it off, for despite being quite in love with IP law, I am not sure I would like to face the music though it will certainly be an experience!
Posted by The Nihilist at 6:42 PM No comments:

Don't Hate Me. Because I love You.

Don't Leave Me. Because I Dream Of You.

But Don't Take Me For Granted. Because I Would Rather Be An Emotional Wreck.
Posted by The Nihilist at 12:21 AM 2 comments: 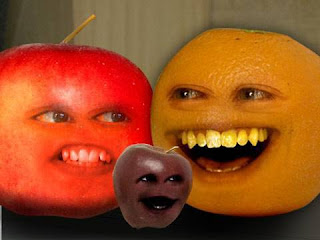 How do you choose between an apple and an orange? Simple, to each his own- your taste, your preference. So far, so good. What when we you have to select between 2 apples? 2 ROTTEN apples? Nah, you can't reject both.

God save the world.

p.s. I don't expect anyone to understand the analogy.
p.p.s. God save the world. Not that I give a damn...

Ah, what do we have here? Finally, a new post. After more than a year, this dysfunctional blog is active again though I have no clue as to how long will this activity last.

Anyway, first things first. This is one of the few entries written with a purpose. For thanking people. Thank you Protiti :) Thank you Peter :) Now while they may themselves not realise it, these people have been instrumental in the demise of writers block (any one who has been directed here from the nujs blogs; I am certainly not talking of the NUJS variety). I can finally write my projects! (sigh of relief)

p.s. I have no words to describe the incompetency of Airtel Kolkata. Suffice to say that I would rather break my head against a wall than dealing with them.

p.p.s. ya, i know this post is hastily written; can hardly be called a good piece of writing; i have lost my flair for writing (was there any in the first place? :-o); you would rather not waste your time reading this blog; blah...blah...blah
Posted by The Nihilist at 6:49 AM 3 comments: 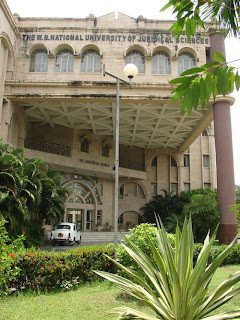 The West Bengal National University of Juridical Sciences was established under the WBNUJS Act, 1999 (West Bengal Act IX of 1999) adopted by the West Bengal Legislature in July, 1999.

A gud 9 years have passed since the specific(can't help it; got a revision class tomorrow) university came into existence.

DATE : 17/08/2008
TIME : 9:30am (approx.)
VENUE : Somewhere in Calcutta (don't know the reason but i seem to prefer the old name to the new one; reason enough to send the 'nationalist' brigade in an overdrive to purge the 'westernised' youth ideas.)

A fragile figure standing by the side of the road, waiting for something on wheels to carry him to his destination.

A cab passes by. The driver looks at the guy standing on the pavement, flashes his dazzling golden teeth and says something incomprehensible.

The taxiwallah smiles. I smile back at him, relieved at the thought that I had finally found some solace for my weary legs and back(with a bag on ur back, and another in your hand, you dont really feel walking down 2 kms.)

CD: shottar taka (INR 70 for the uninitiated; please do not envy me, i m not in much better a position either)

Now, it is my turn to stare at him.

YT: 25 rupay lagte hain(i paid 30 while coming, but then bargaining is the birthright of every Indian.).
CD: nahi dada (since he has finally realised that this moron cannot speak in the language he should while in Bongland.)shaath (INR 60) se kam nahi. Hajira law college dur hai.
YT(pulling hair): Not Hajira Law College..N-U-J-S..hmm..uhmm..achcha, NIFT pata hai? fashion technology?

With a resigned look, I retreat back to 'my' pavement..the taxi driver after staring at me for a second or two, like I am weird creature from some distant planet, drives off.

YT: Dada, NUJS (before the poor guy can open his mouth)..achcha, NIFT, beliyaghata..

The CD is still staring blankly. Suddenly I get a brainwave.

CD seems to be contemplating the offer.

I start thinking of 2(a) and 2(b) and the remedies that I could take recourse to, in case the contract does not materialise. Before I can think of any cases, panic seizes and I realise this is my best chance.

A smile plays on CD's face. I breathe a sigh of relief...

The way my posts are going, I thnk I should create a new blog-The most random blog in the blogosphere. Not that it would be any better, just that people who stumble upon this useless blog even after being warned by the title of the blog(ah! didn't someone say something about the forbidden fruit being the sweetest!), will save some precious time(a CS invitation has been multicasted; and I have just realised the value of my blog;however useless!)

Sometime ago, the question haunting me was, "Why did I mess up CLAT?" (written in direct speech to orchrest an unsuccessful attempt to dramatise things) but strangely I am at peace with myself now...Carpe diem! Period.

Now the paucity of time(a cliched excuse;it is actually brains) stops me from boring people further..did a sigh of relief escape someone's lips? :P
Posted by The Nihilist at 9:00 PM 2 comments:

Why am I even writing this?..maybe to remind people that I am still alive, may be because Anjaneya asked why the blogosphere had been orphaned by me :P or maybe because I am not in a mood to write 2 pages(less than what Pranav has to write :D) on the Hanuffa Khatoon rape case (Railways v. Chandrima Das).
It has been 23 days since classes started..had landed here with high expectations(though the CLAT result had already made me learn my lesson but made the same mistake again). Doesn't mean, NUJS is bad. In fact it is great and more importantly it is fun to be here. It is one of the best legal institutions in the country..I won't say the best because of the following reasons:

a) NALSAR claims that the crown rests on its head..I believe I have better things to do in life than dispute this claim (no offence, it is just that I find it a little funny..though my sense of humour is not something that weary war veterans would recommend. If you are still not convinced, do not blame me that I did not warn you before.In fact this is precisely what I shall do- Statutory Warning: It is injurious to health.)

b)"Do not judge me till you have lived my life"- since I have never been a part of eminent institutions like Haldia Law College and BHU, I shall not comment.

Would be NLS and NALSAR 1st years leave tomorrow(at least my friends do)..5 years is a long time but I believe it shall serve only to make us stronger and more resolute.

I think, I should sleep now unless I want to be caught napping in tomorrow's class..as a matter of fact, I won't be because I have this tendency of not falling asleep while lectures even when I haven't slept the night before.
Disclaimer: This does not mean, I will tolerate extremely boring lectures.. I can switch off even with my eyes wide open.

I guess I will close my eyes for now (I wont be able to switch off though..an entire world of dreams awaits me and oddly(it is natural actually)I know exactly what it is about).

Good night
Ciao
Posted by The Nihilist at 1:34 AM 1 comment: